The Royal Navy has deployed the amphibious assault vessel HMS Albion (with 300 Royal Marines embarked) to the Pacific in support of UN sanctions on North Korean shipping, making her Britain’s third vessel assigned to the mission.

The frigate HMS Sutherland is already in the area, having docked at the Japanese port of Yokosuka on 11th April to prepare for patrols in the area.

A second frigate, HMS Argyll is also due to join the effort.

“Our armed forces are at the forefront of Global Britain and the deployment of HMS Albion, Sutherland and Argyll demonstrates our unwavering commitment to our international responsibilities and to maintaining peace, security and prosperity in the region”, said Gavin Williamson, the defence secretary, to mark HMS Sutherland’s arrival in Japan. (quoted in the Telegraph)

It “will be contributing to the international efforts to monitor prohibited trade at sea by the Democratic People’s Republic of Korea (DPRK), which provides a major source of funding for its illegal nuclear program,” the Defense Ministry said in a statement, referring to North Korea by its official name.

“It’s about pressure. She is part of an international message that is going to North Korea and for the United Kingdom to see fit to send one of its frigates, to change its deployment from Southeast Asia, is part of that very powerful message,” Paul Casson, the British defense attache in Japan, told reporters in Tokyo.

The frigate will join policing operations in the seas around North Korea for about a month and will have the capability to board and inspect ships if called on to do so, Casson added. (quoted in Asahi Shinbun) 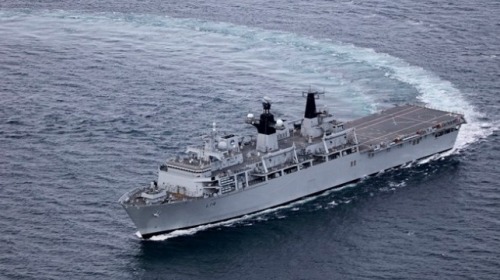 HMS Albion – an amphibious warfare ship, Albion carries troops, normally Royal Marines, and vehicles up to the size of the Challenger 2 main battle tank. She can deploy these forces using four Landing Craft Utility (LCUs) and four Landing Craft Vehicle and Personnel (LCVPs). A flight deck supports helicopter operations. Albion can function as a command ship, and was the Royal Navy flagship between December 2010 and October 2011.

HMS Sutherland – Type 23 Frigate, first circumnavigation of the globe by a Royal Navy ship in 14 years; first ship to receive and fire the updated Seawolf air defence missile system; most rounds fired by a modified 4.5in ‘Kryten’ gun in one day (247 if you were wondering). She is also Britain’s fastest frigate, reaching more than 34 knots (39mph) during trials in 2004.

Submarines – or perhaps they are already there?

If you are going to have an unboroken presence in the region, why not go the extra step and have a RN vessel home-port in Japan permanently?