A chronological record of the Anglo-Japan Alliance (1902-1923), and today’s emerging partnership or ‘New type of Alliance‘

Anglo-Japanese Treaty of Amity and Commerce

Britain became the first Western power to revise its ‘unequal treaty’ with Japan.

Anglo-Japanese Treaty of Commerce and Navigation

– Britain declines to join the triple intervention of France, Germany and Russia against the Japanese occupation of the Liaotung peninsula.

“The focus of international competition is moving steadily towards the Pacific Ocean and… Japan is obliged… to play an ever increasingly [sic] part in the peaceful development of that portion of the globe [cheers]. I sincerely hope … that these friendly feelings and mutual sympathies which have existed between us in the past shall be daily more strongly cemented in the future [cheers].”  Ito Hirobumi, London, 3 January 1902

– August 12th – Anglo-Japan Alliance extended and expanded, or the ‘second alliance’ (as it is known in Japan) concluded. Mutual assistance to secure Japan’s interests in Korea and Britain’s interests in India (against Russia).

– Anglo-Japan Alliance renewed for 10 years, but Japan is warned not to expect British assistance in the event of war between Japan and America.

– Washington Conference sets naval balance among America, Britain and Japan at ration of 5:5:3. Alliance is not renewed.

William Forbes-Sempill, the Master of Sempill and the son of a Scottish peer, brought British instructors to nurture the Imperial Japanese Navy’s fledgling aerial component. The ‘Sempill Mission” was in Japan during 1921-23.

– Ratification of Four Powers Treaty (Britain, America, France and Japan) agreed at the Washington Conference closes the door on the Anglo-Japan Alliance.

Anglo-Japan relations entered a “dark valley” over this period, ably covered by Captain Malcolm Duncan Kennedy in his book “The Estrangement of Great Britain and Japan, 1917-35”, published by Manchester University Press, 1 Oct. 1969.

Establishment of the UK-Japan 21st Century Group at the joint recommendation of the British and Japanese Prime Ministers, Margaret Thatcher and Yasuhiro Nakasone. The primary purpose of the UK-Japan 21st Century Group is to promote dialogue and cooperation between the two countries. Members include parliamentarians, business leaders and representatives from the media, think tanks and academia. At the Group’s annual conference, held alternate years in the UK and Japan, delegates discuss any issue that might affect our bilateral ties and make suggestions on how to enhance them. The Chairmen’s summary and recommendations from the conference are then sent to both Prime Ministers and to government departments for consideration and action.

January 9th – Japan-UK Joint Statement: A framework for the Future

PM Abe, PM Tony Blair held their first summit meeting in London during Prime Minister Shinzo Abe’s first official visit to the UK. The two Prime Ministers reviewed the state of the bilateral relationship between Japan and the UK, exchanged views on key issues of international concern and decided to establish a framework for enhanced co-operation between the two countries, specifically “to work towards achieving a set of objectives in the areas of international security, climate change, international development and science, technology and innovation”. 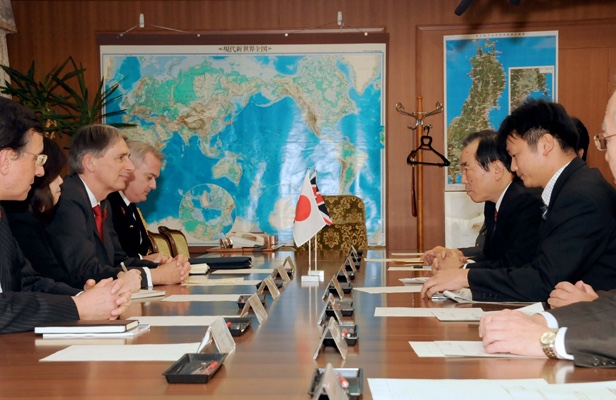 December 27th – Japan amends its Guidelines on the Overseas Transfer of Defence Equipment, opening up the possibility of trade and R&D cooperation that had been denied under the previous guidelines for interpreting the ‘Three Principles on Arms Exports’. This change permits Japan to export arms if they are: 1) to contribute to peace and international cooperation; or 2) to jointly develop or produce with a security partner or partners. This gives ‘partners’ an interesting statutory status – more than friends but less than allies?

Extract from full text of agreement on “A Leading Strategic Partnership for Global Prosperity and Security“:

Reflecting the increased cooperation and engagement in the field of security and defence between the UK and Japan, we have decided:

Building on the initiative shown by the two Prime Ministers, Japan and the UK will deepen the existing dialogues between relevant Ministers and senior officials, to address the above mentioned issues in a joint effort to promote international prosperity and security.

October – The idea of the trans-Eurasia alliance between Japan and Europe or Japan and UK “would make the world a more stable place” said Dr Chiaki Akimoto, the head of Royal United Services Institute (RUSI) new Japan office, at the RUSI Japan office launch.

(1) The two leaders welcomed specific progress that has been made in bilateral relations in the security and defense areas and reached agreement as follows:

(2) After Prime Minister Abe explained Japan’s economic measures, the two leaders reached an accord to cooperate in Japan-European Union (EU) negotiations on concluding an Economic Partnership Agreement (EPA) for further strengthening of economic relations between Japan and the United Kingdom. Specifically, they agreed to strive to create an environment that facilitates investment by Japanese businesses.

November – HMS Daring visits Japan. HMS Daring arrived in central Tokyo on Sunday 1 December, where it was berthed next to the Japanese ship Teruzuki for three days. British festivities to celebrate the ship’s visit were also held at the Yokohama Country Athletic Club from 3 to 6 pm on the afternoon of Sunday 1 December, including cricket and a performance by the Royal Marines Band.

November 27th – exchange of Liaison Officers between HMS Illustrious and DDS Ise to support bilateral coordination for HADR operations in the Phillippines (link).

April 14th   Before an audience of 250 at the Japanese Diet, UK Chief of Defence Staff General Sir Nicholas Houghton advocated an ‘enhanced and formalised’ UK-Japan defence relationship that would help both countries cope with ongoing global and regional challenges. (link)

May – Prime Minister Abe visits London. Japan and the UK agreed to “start negotiations on an Acquisition and Cross-Servicing Agreement [ACSA]  (a military logistics support agreement to provide logistic, technical, and administrative support to each other’s forces) at an early date and hold their first ‘2+2′ foreign and defence ministerial meeting. Prime Minister Abe and Cameron’s joint statement added that they would “examine the opportunities and develop proposals” to make joint contributions to international peacekeeping efforts, military exchanges, joint exercises, operations and support, and “establishing a new mechanism to share information and analysis that supports the purposes of our co-operation” (link).

May 2nd – Vice Parliamentary Minister of Defence Kihara Minoru gave a speech at IISS entitled “Japan and the UK as strategic partners – toward further co-operation in the defence field” (link). Call to strengthen the UK-Japan relationship as a ‘trans-Eurasia relationship’ to compliment the trans-pacific relationship (Japan-US) and trans-Atlantic relationship (UK-US).

July 15 – Hugo Swire, Minister for Asia gave a speech entitled The UK in the Asian Century at the Carnegie Institute, Washington, on how a prosperous and stable Asia Pacific matters to British interests. The subtext was that Britain has its own intentions about playing a role in Asia (trade, peace and stability and values), but re-assured the Washington DC audience that “By closer co-operation on Asia Pacific, we [US and UK] can further strengthen Trans-Atlantic ties and together ensure that both our countries get the best from the Asian Century”.

July 17 – Japan and UK agree to joint development of missile technology for air-to-air ‘Meteor’ missiles  (link). The Meteor project, which is developing missiles for Eurofighter planes, is being led by Franco-British missile maker Matra BAe Dynamics (MBD) along with other European firms.

November  HMS Atherstone spent two weeks working in close company with the ships and staff of the Japanese 51st Mine Division in the waters of the Gulf. (Link)

January 21 – 2+2 meeting of Foreign and Defence Ministers in London.

“I congratulate the Japanese Parliament on passing legislation that will allow Japan to play a greater role in international peace and security. The UK welcomes these security reforms, and we look forward to Japan taking an increasingly active part in peacekeeping operations and supporting international efforts to secure peace and prosperity. I look forward to further discussions with the Japanese government as it implements these important changes. We remain determined to work closely with Japan to defend and protect our global shared interests, and play our part in upholding the rules-based international system.”

October 16 Chiefs of the Japan Maritime  Self-Defence Force, First Sea Lord of the Royal Navy and CNO of US Navy sign a statement of their trilateral maritime talks recognizing the opportunity to strengthen maritime contributions for achieving mutually desired strategic effects.  (link)

November – soldiers from the Japanese Fuji Camp based GSDF recon unit participated in the exercise VAMBRACE WARRIOR in Wales, focused on  sustained Static Covert Surveillance (SCS) at range, close target reconnaissance and the terminal guidance of remote fires, against an Opposing Force element of specialist Counter-Surveillance (CS) and Ground Based Air Defence (GBAD). The JGSDF team participated in this exercise for one week, inserting into the area of operations covertly and constructed an observation post from which they reported on the Opposing Force movement undetected.  (link)

Subsequently a UK Royal Navy officer joins the Enforcement Coordination Cell (ECC) that fuses information on sanctions enforcement from a “5-eyes plus” coalition including the US, Japan, Australia, New Zealand, Canada, France and ROK.

UK Royal Marines visiting Japan on HMS Albion joined the Japan Self Defence Forces amphibious rapid deployment brigade (ARDB) activated just a few months prior, to conduct a joint exercise coming ashore from the HMS Albion and the Japanese Navy’s JS Shimokita. Although the exercise was canceled owing to a passing typhoon, the joint planning phase of the exercise went ahead (link).

October – British Army exercises with GSDF on Japanese soil. Aside from the USA, this is the first time a foreign army has exercised on Japanese soil in the post-WWII era (link). More detail here.

November 18-20 – DSEI Defence conference debuts in Japan, the fist time the conference has taken place outside the UK. Speakers from UK Royal Navy and the London Metropolitan Police feature alongside Japanese, US and Australian speakers.

Negotiations on an inter-service (UK Royal Navy – Japan MSDF) agreement to facilitate the sharing of maritime information between the United Kingdom and Japan and support safer international transportation.

February 3 – 2+2 Ministerial meeting. Joint statement. This meeting was the 4th UK-Japan 2+2 meeting and took place remotely due to Covid restrictions.

(1) The Japanese side welcomed the UK’s announcement of the planned visit by HMS QUEEN ELIZABETH and her Carrier Strike Group to the region including East Asia this year as an indication of the further commitment of the UK to the Indo-Pacific region. The four Ministers also shared the view to coordinate towards the implementation of joint exercises during this visit, as part of cooperation towards the realization of a Free and Open Indo-Pacific.

(2) The four Ministers welcomed the signing of a Maritime Security Arrangement to further security cooperation between the Japan Maritime Self-Defense Force and the British Royal Navy as well as the steady progress made on the bilateral ground exercise which has taken place in Japan and in the UK to date.

(3) The four Ministers shared the view to continue cooperation on capacity-building for developing countries in a wide range of areas including maritime security in order to realize a Free and Open Indo-Pacific.

(4) The four Ministers also reaffirmed that they would further promote practical cooperation on monitoring and surveillance activities against illicit ship-to-ship transfers by North Korea-related vessels.

(5) Regarding defense equipment and technology cooperation, the four Ministers welcomed the ongoing dialogues on the Future Combat Air System/F-X at subsystem level, emphasised the importance of the research programme for the demonstration of a joint new air-to-air missile and welcomed progress made on the Project for Cooperative Research on the Feasibility of a Japan and Great Britain Universal Advanced RF system.

Conclusion of the JMSDF/Royal Navy’s agreement to facilitate the sharing of maritime information between the United Kingdom and Japan and support safer international transportation.

The four Ministers confirmed to work together on the Carrier Strike Group’s visit to East Asia so that it will be an opportunity to elevate Japan-UK defence cooperation to a new level.