December welcome for Royal Navy in Tokyo, cooler for Cameron in Beijing 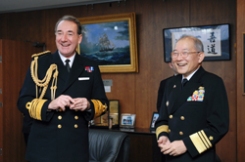 Admiral Zambellas was welcomed by Vice Admiral Izuru Fukumoto, President of the JMSDF Staff College. Admiral Zambellas mentioned in a lecture to the students and staff that Japan and the UK are keeping a close relationship with the same ambition as natural “a priori” partners under the current international situation and security environment (link).

In a new article “The UK, Europe and Japan: Forging a New Security Partnership” (RUSI Journal, Dec 2013, Vol. 158, No. 6), Michito Tsuruoka looks at the recent developments in the UK-Japan security relationship. His assessment reminds me why I decided to start this blog:

“…the level of the UK’s engagement in Asia in reality is already substantial and it is for this reason that Japan regards Britain as a primary partner in Europe. The reverse is also true: as part of its growing interest in Asia as a whole, London is also placing increasing value on developing political and security co-operation with Japan in addition to existing trade and economic relations.”

The author points out several reasons why the relationship with the UK makes good sense for Japan:

1. Among European nations the UK has a mix of capabilities that are useful in terms of Japan’s security interests (intelligence, military global reach in maritime, air patrol, ground forces experienced in peace / stability operations). It does not get a mention here, but the fact that the UK keeps an embassy open in Pyongyang is a good example of comparative advantage in Japan’s neighborhood.

2. UK’s relationship with USA makes it a good fit with the Japan-US alliance as well as growing cooperation with Australia (‘five eyes’ on intelligence) and the region (e.g. FPDA).

3. A close relationship with the UK gives Japan a gateway for influence in Europe.

4. UK and Europe’s position on democratic norms and values, rule of law, etc., is aligned with Japan’s interests, including in emerging areas of norm-making on cyber and outer space.

For me, the points of constructive criticism presented in this article are really worth pondering:

A. Tsuruoka notes that “Japan expects the UK to also play a role in defining the direction of the EU’s foreign and security policy”, but this is not easy at the best of times, least of all under a Euro-skeptic Conservative government. And this is not the best of times in terms of agreement among the larger EU Member States either – as we saw from the recent European Council Summit discussions in Brussels on the future of the EU’s Common Security and Defence Policy (link), which one commentator summed up as ‘not much ado about nothing very new‘. True, some of Britain’s problems are with Europe, but some problems are of Europe itself.

B. The UK should follow France and articulate “… a more detailed official pronouncement regarding its overall strategy for political and security engagement in Asia”. Here the key for Britain – as for many others – is to figure out how to fit a China policy into an Asia strategy. The contest over territory and sea/air space in the East and South China seas is having the effect of pushing this question towards a ‘value-based’ determination: adherence to the rule of law and the non-violent settlement of international disputes. As seen in an awkward visit by Cameron to Beijing recently (“Relations between Britain and China strained over naval ship’s visit to Japan“), just as the British PM thought he had put one ‘value’ issue behind him (no more meetings with the Dalai Lama), it is China’s assertiveness in the region that is pushing the UK into Japan’s camp:

“A visit by the Royal Navy’s most senior officer to Japan, at the same time as the Prime Minister was in China, has risked a new diplomatic rift between London and Beijing. Admiral George Zambellas, the First Sea Lord, met Itsunori Onodera, Japan’s defence minister, last week and reportedly pledged his support for the Japanese military. The intervention came amid a growing military stand-off between Japan and China over a set of islands in the East China sea.The visit by Adml Zambellas received virtually no publicity in this country but was seen as a major intervention by the Chinese… The depth of Chinese anger over Adml Zambellas’ visit to Japan was exposed by an editorial in a state-run tabloid newspaper, which claimed Adml Zambellas had “supported Japan’s stance towards China’s recently declared Air Defence Identification zone in the East China Sea”. The newspaper added: “This has added doubts over Cameron’s sincerity in improving ties with China. Perhaps there is no need to talk about ‘sincerity’ in terms of Sino-British relations.”

“…while the notion of Anglo–Japanese political and security co-operation is not particularly new, the changing nature of regional and international security and respective developments in Europe and Japan have substantially altered the context within which this relationship operates. There are now a number of drivers that could lead to a stronger partnership. Whether the two governments can seize the moment and succeed in building a firm foundation on which to develop the future relationship depends on what they can achieve in the coming years”

Looking at his analysis in the context of recent events, it seems that what Britain and Japan can achieve in terms of their cooperation in the coming years will be strongly affected by what is happening with their respective continental neighbors. On the surface, Japan could gain by Britain getting along better with Brussels just as Britain would benefit in some ways if Japan got along better with Beijing. But on closer scrutiny the symmetry breaks down. More than anything, it is Beijing’s assertiveness (combined with America’s weakening) that has pushed Japan to become more outward-looking on defence and security. Britain’s search for alternatives to its post-war security relations has less to do with the emergence of a Continental superpower than with the shift of economic dynamism and geopolitical tension from the West to the East. But it is just this kind of prompt to take a wider perspective that the makes the ‘new type of alliance‘ so important for Japan and Britain. London should carefully consider Japan’s advice and accept that national interest need not always come through the maximisation of sovereign independence, and the benefits of being ‘in’ Europe when it comes to foreign and security policy vastly outweigh the costs. It is also good that London is encouraged to make an informed calculation in its Asia policy that balances short term material gains against the deeper values of peaceful international order.