Japan has a strategic perspective beyond Brexit 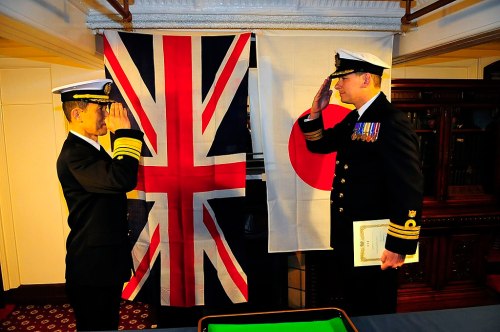 PHOTO: A ceremony aboard the Japanese Battle Ship Mikasa, in February 2015, recognising British and Japanese cooperation in the Indo-Asia-Pacific region. US Navy via Wikimedia Commons

According to a recent article by Tomohiko Taniguchi, (advisor to PM Shinzo Abe) entitled

“Brexit: The view from Japan (or the ‘Tokyo Consensus’)”

a new consensus has emerged amongst Tokyo-based policymakers, such as members of Japan’s Ministry of Foreign Affairs and those close to Prime Minister Shinzo Abe, myself included. Call it the ‘Tokyo Consensus’. It assumes that, as far as Japan’s national interest is concerned, Brexit may well turn out to be a blessing in disguise. The benefits of Brexit for Japan, which are largely geopolitical, could offset its costs, which are mostly economic.

This assumption appears to be shared internationally. Conversations with diplomats and visitors from Australia, New Zealand, India and the US, amongst others, have given me a sense that the ‘Tokyo Consensus’ may have a wider, Indo-Pacific, application…It is as though the UK and Japan are meeting one another again and finding a common ground to strengthen their respective international standings. Brexit was a catalyst, and could further accelerate this development.

But then Taniguchi-san puts his finger on the key issue:

Whether Britain will be sufficiently bold and innovative to turn Brexit into a geopolitical advantage is the question.